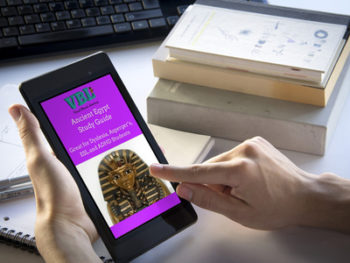 The Ancient Egyptians had a variety of transportation means, including animals, chariots and boats. The most common form of transportation used by the lower classes of Egypt was walking. The Egyptians didn’t have, nor did they need to build roads or highways to travel, because they already had a “superhighway” that ran directly through the middle of the empire, known as the Nile River. The majority of cities in Ancient Egypt were situated along the banks of the Nile River; as a result, the Egyptians became experts at building boats and soon the primary method of Ancient Egypt Civilization transportation was navigating the river by boat. They had a variety of boats that were used for traveling as well as transporting goods for trading purposes and ceremonial uses.

The Egyptians eventually learned to make boats from wood, primarily acacia wood from Egypt and/or cedar wood that was imported from Lebanon. Large wooden ships relied on square sails and oars for movement. Instead of using nails, the wooden boats built by the Egyptians were generally made from several short planks that were tied together with ropes. The pyramids were built using large blocks of stone that had been transported by large, wooden cargo ships that traveled along the Nile River.

During Ancient Egyptian civilization transportation wasn’t the only use for boats. The Egyptians believed that in order to travel to the heavens in the afterlife, a boat was necessary. So, some burials included a small model boat that was buried with the deceased. Wealthy Egyptians and Pharaohs often were buried in tombs with a full-size boat.

During the Ancient Egyptian Civilizations, the Nile River was basically a “water highway” that joined the country together. Unless it was through walking or by way of animal, traveling by land was virtually unknown. Boats and ships were the primary source of transportation for both people and goods, around the country.

[/vc_column_text][vc_btn title=”Sign Up for our Membership Site Today!” align=”center” link=”url:https%3A%2F%2Fwww.visualbrandlearning.com%2Fvisual-study-guides%2F|||”][/vc_column][/vc_row]