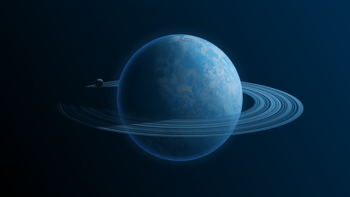 Astronomy Study Guide : Beyond the Solar System. Our Solar System is not the only network of celestial bodies that exists in the universe. In fact, our sun is only one of hundreds and billions of stars in the Milky Way galaxy that hosts a group of planets in its orbit.

• Beyond the solar system are billions of other stars that form their own networks of exoplanets or extra solar planets in the Milky Way.
• In the Milky Way’s center, the Solar System and extra solar systems revolve around a massive black hole that is 4 million times larger than the sun.
• The Milky Way is a spiral galaxy that looks “milky” from afar as viewed from Earth.

• The Milky Way is one of more than 30 galaxies that are gravitationally bound to one another in a cluster called the Local Group.
• The galaxies are made up of stars, planets and other bodies revolving around a galactic center.
• One of the galaxies in the Local Group, Andromeda, is observed to be moving on a collision course towards the Milky Way. The predicted collision is estimated to occur within 4 billion years.

• Beyond the Local Group are many other galactic clusters.
• The clusters seem to be moving away from each other because more space gradually grows between them.
• The increase in space indicates that the universe is continually expanding.
• Upon the discovery of this growing space, scientists thought that the gravitational attraction between the clusters will cause the expansion to stop and reverse. However, in the 1990s, it was observed that instead of slowing down to a stop, the expansion was accelerating.
• The accelerating expansion is believed to be caused by what they call as “dark energy”, which originates from the vacuums of deep space.
• In the calculations of scientists, the dark energy comprises 68 percent of all materials in the universe.
• It is estimated that at least 100 billions of galaxies exist in clusters in the expanding universe.

See our new Astronomy video study guide, free for a limited while we create one for all our subjects. Be sure to like it so we can make more.

Visual Brand Learning also offers Annual memberships for only $25.00 that are valid for one year from the date of purchase. You can enjoy 365 days of accessing over 400 individual study cards that are available online and printable study guides. We also offer many resources for Visual Learners their parents and teachers such as interactive Maps for Common Core and Dyslexia. We also provide information on videos, books, articles and Professional Organizations related to all Visual Learners. Check out our website at  www.visualbrandlearning.com[/vc_column_text][vc_video link=”https://youtu.be/1RJhYZ-tZg4″][vc_column_text]