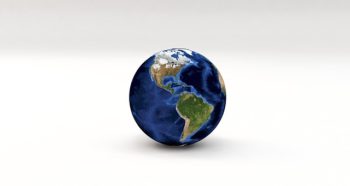 The Earth is the third planet closest to the sun in the Solar System. It is the only known planet to have the atmosphere and environment that is capable of supporting life.

• The Earth rotates or spins on its axis.
• The axis is an imaginary line that marks two points or poles on opposite parts of a planet.
• The Earth’s rotation causes portions of the planet to face or hide away from the sun. This leads to a cycle of light and darkness, which we call day and night.
• One rotation is one cycle of day and night. And it takes 24 hours for the Earth to complete one rotation.

• The Earth revolves around the sun, along with the sun’s orbit.
• The Earth completes one revolution in 365 ¼ days. One revolution equals a one year cycle. That is why we have 365 days in one year.
• Every four years, a leap year occurs. During the leap year, the remaining four ¼ days for each year are accounted.
• The Earth’s revolution also causes the different seasons to occur. Seasons happen because, during the revolution, the Earth’s position is gradually and continuously tilted on the axis.
• Compared to the planets in the outer Solar System (Jupiter, Saturn, Uranus, and Neptune), the Earth completes one revolution in less time. This is because the closer the planet is to the sun, the faster it revolves around it.

• The planet Earth has only one moon, which is named Luna.
• The moon also rotates on its own axis and revolves around the Earth’s orbit.
• Because of the rotational and revolutionary movement of the moon, the portion of its surface that is illuminated by the sun changes and creates what we call as “phases”.
• In each phase, the moon looks differently and they follow a pattern or cycle called the lunar phase cycle. The cycle starts and ends from new moon to new moon and is completed in 29.5 days.

The moon has the following phases:

• The Earth’s seasons are caused by the changes in its axial position during its revolution around the sun.
• The summer season occurs when one axis point is tilted directly towards the sun. That hemisphere then experiences increased heat exposure and increases the temperature of the atmosphere.
• The opposite hemisphere, on the other hand, will experience decreased heat exposure which results in colder temperatures and creates a winter season.